The Zurich flood resilience program works closely with Indonesia’s Red Cross Society (PMI) to mitigate the impact of floods in the Bengawan Solo river basin on the island of Java, Indonesia. The program has proved so successful that local authorities are now using our approach to help more communities across Java.

By educating residents in Tulungrejo about flood risks, we are helping them to be better prepared for floods. Through our efforts, we are also providing knowledge that can be used by many more communities.

Together with PMI, we choose which communities are most likely to benefit from our approach.  By using PMI’s on-the-ground presence, supported by Zurich’s understanding of flood risks, we are already making a difference in the lives of people in the village of Tulungrejo, in Bojonegoro district.  We work with communities like these to lessen the risks that floods cause. We hope that by focusing on building resilience before a flood, we reduce the need to rebuild lives and livelihoods every time a flood strikes.

Through surveys in communities, PMI found that one of the most immediate threats to people in Tulungrejo was difficulty in getting to higher ground when floods hit. The village has access to an emergency shelter the government has provided. But the shelter is too far for some people to reach, a major drawback in a place where floodwaters rise very quickly.

As a first step, the program has provided funds to build a raised evacuation site nearer to the village that can accommodate several hundred people.  PMI has also created safe routes across the village to the new shelter and trained local volunteers as first-responders to form a ‘community-based action team,’ or ‘SIBAT.’

Beyond these initial steps, the flood resilience alliance is developing a better early warning system in Tulungrejo and has built a command post (‘POSCO’) that can serve as a crisis center for emergency response teams during floods.  Once established, it will be equipped with technology to provide early warning bulletins, weather reports and other important public announcements. To increase the impact, when not in use during floods, the community volunteers’ action team (SIBAT) will conduct flood simulation exercises from the center. As part of the program, PMI has also introduced activities to raise community awareness, particularly in schools.

Extending the approach beyond Tulungrejo

The local government in the Bojonegoro district sees the value of the SIBAT (volunteer) approach, which has been formally endorsed by the district administration.  Local administrators have already provided funds to similar projects in another village in Bojonegoro district to set up SIBATs, and are recommending that the model used in Tulungrejo be adopted and implemented in all at-risk communities in the province.

Impressed with the results, district officials believe the programs could even be adopted nationwide.

Measuring success with the 5C-4R approach

Each community is different. But by using their various types of ‘capital’ –the ‘5Cs’ – and deploying and improving traits that help them cope with floods – the ‘4Rs’ – nearly every community can improve its resilience to floods.

Our work in Tulugrejo, Indonesia, includes helping residents to better understand what they can do to help keep themselves and their families safe from floods.

We can measure what we achieve (see chart on the right) in terms of the ‘5Cs and 4Rs.’ 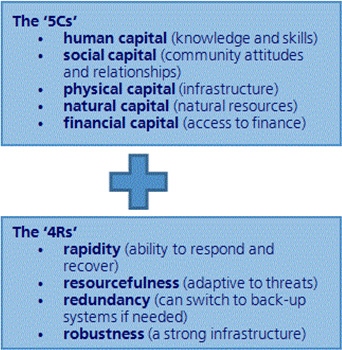 Each community is different. But by using their various types of ‘capital’ –the ‘5Cs’ – and deploying and improving traits that help them cope with floods – the ‘4Rs’ – nearly every community can improve its resilience to floods.

About the Zurich flood resilience alliance

An increase in severe flooding around the world has focused greater attention on finding practical ways to address flood risk management. In response, Zurich Insurance Group launched a global flood resilience program in 2013. The program aims to advance knowledge, develop robust expertise and design strategies that can be implemented to help communities in developed and developing countries strengthen their resilience to flood risk.

To achieve these objectives, Zurich has entered into a multi-year alliance with the International Federation of Red Cross and Red Crescent Societies, the International Institute for Applied Systems Analysis (IIASA) in Austria, the Wharton Business School’s Risk Management and Decision Processes Center (Wharton) in the U.S. and the international development non-governmental organization Practical Action. The alliance builds on the complementary strengths of these institutions. It brings an interdisciplinary approach to flood research, community-based programs and risk expertise with the aim of creating a comprehensive that will help to promote community flood resilience. It seeks to improve the public dialogue around flood resilience, while measuring the success of our efforts and demonstrating the benefits of pre-event risk reduction, as opposed to post-event disaster relief.