The latest Regional Risks for Doing Business Report by the World Economic Forum, in partnership with Zurich Insurance Group, shows that economic risks remain high, with the risk of a fiscal crisis taking top spot in the Executive Opinion Survey. Certainly the level of global indebtedness should be a concern to us all, with corporate, household and government debt remaining extreme despite the better economic growth over the past few years. But it is the high levels of government debt that begs the question of whether fiscal support – government spending – will be deployed as it was in the past, to help avoid or at least mitigate the next recession.

What I find particularly remarkable is that at a time when government indebtedness is so high and confidence in governments so low - note the continued rise in populism - investors are falling over themselves to lend governments money. More remarkable still, is that they are prepared to be charged negative interest rates for the privilege! What an upside-down world we live in. Around 30% of all fixed income investments, or ~$16 trillion of government bonds and credit, now have negative yields – including a few companies in the High Yield indices, a misnomer if ever there was one.

One reason for this, of course, is that with global growth again weakening, the interest rates set by central banks have moved even lower. This year has seen more than half of global central banks move back into rate-cutting mode. However, balance sheet recessions are strange beasts and as we have seen over the past ten years, monetary policy becomes less and less effective in stimulating growth. In such an uncertain world, with a trade war between the two economic Goliaths impacting us all, financial engineering is the name of the game. Rather than growing the economic pie and improving trend growth through investment and greater productivity, companies are encouraged to use cheap debt to buy back and retire their costly equity capital, leading to asset price reflation rather than stimulating economic growth. Indeed, while business investment has increased by around 50% in the US over the last decade, stock repurchases and dividend increases are up 300%. Of course, this makes economic sense in the short term. An immediate financial gain today is worth more than the hopes of achieving one through investment in the future. Something has to change. 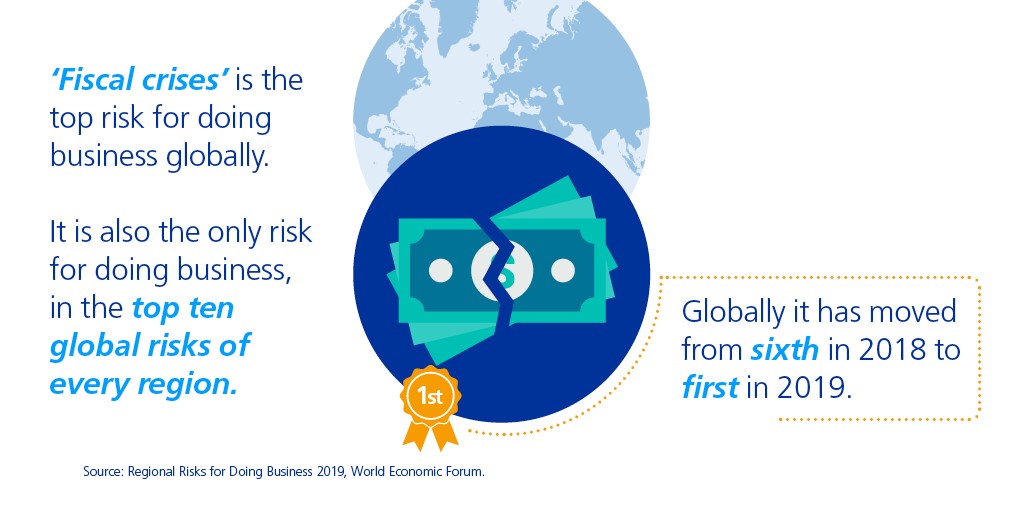 In order to reduce the risk of fiscal crisis, government spending needs to be thought about differently. Spending for investment should not be considered the same as spending on consumption. Of course the hard part is agreeing to that definition and then sticking to it. But governments need to take advantage of cheap borrowing to ‘invest’ and should not be prohibited from doing so due to rigid rules being applied. Yes, debt levels are a very real concern, but so too is a slide towards recession. Governments need to work alongside central banks to create a more robust and sustainable growth environment – something that has failed to be achieved over the past decade. Rather than incentivising asset price reflation through monetary policy alone, incentives and fiscal initiatives need to be deployed that encourage real engineering of the global economy rather than the financial engineering of recent times. Developed economies need to push forward and become ‘developing’ economies to increase their growth potential and developed companies need to become ‘developing’ companies to improve productivity over the longer term as well as their profitability. This will take tax incentives to effect the change, and government investment to create a multiplier effect on growth that can embrace rather than crowd out the private sector. If this is not forthcoming, fiscal crisis is indeed a key risk, potentially hastening and deepening the next global recession.