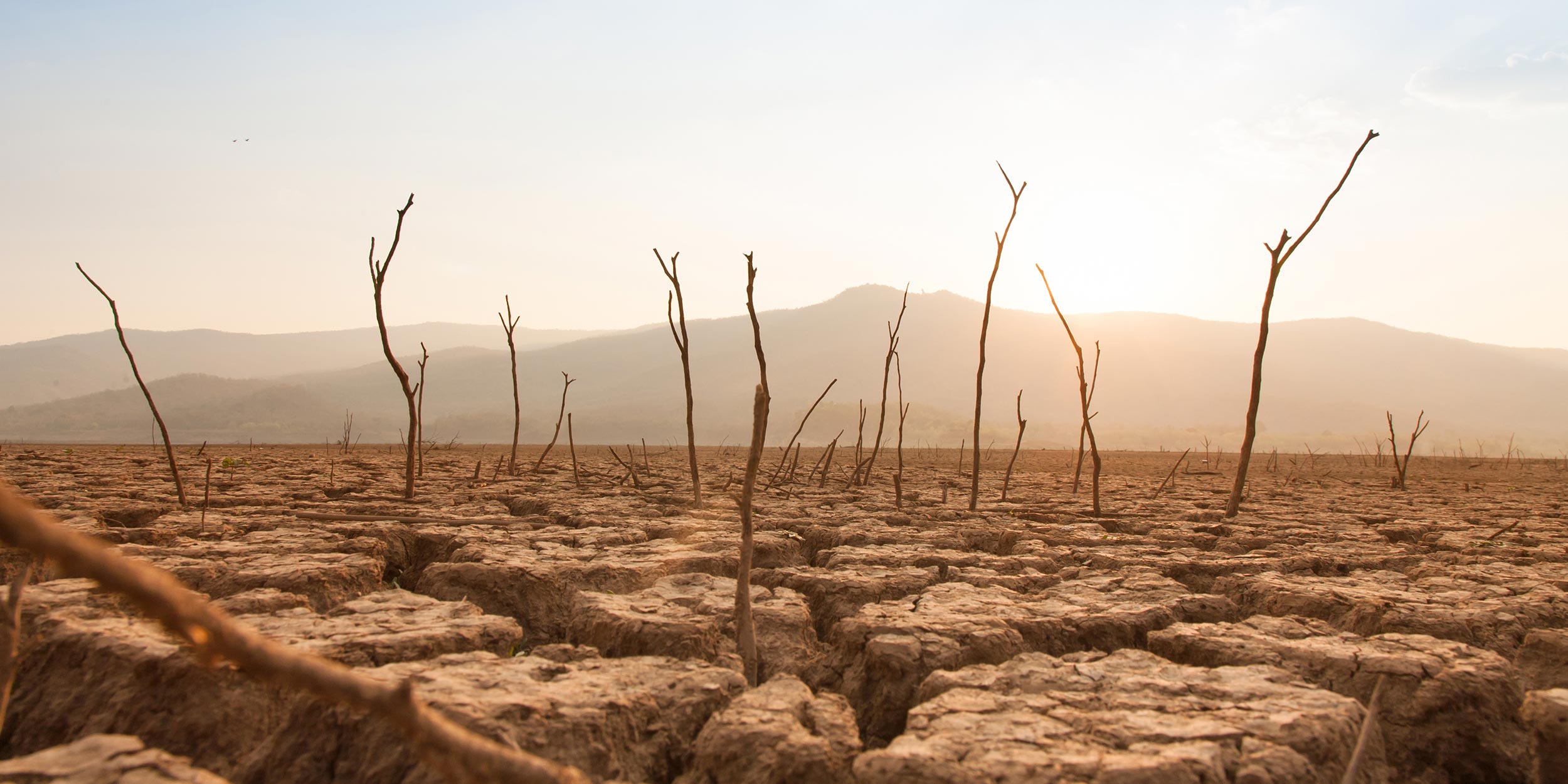 The urgency emergency: why businesses must act now to avert climate catastrophe

Faced by the prospect of a “sixth mass extinction”, businesses, consumers and regulators must come together to shift paradigms and safeguard natural resources.

As striking schoolchildren take to the streets and Extinction Rebellion brings global capitals to a standstill, the climate emergency has well and truly moved to the center of public debate.

And when smoke from Australian wildfires obscures the sun in New Zealand – more than a thousand miles away – while Jakarta is swamped by unprecedented rainfall, the effects have never been more visible.

Worldwide economic stress and damage from natural disasters in 2018 totaled US$165 billion – half of which was uninsured. Yet even these catastrophic events do not fully express the extent of environmental risk facing the world today. 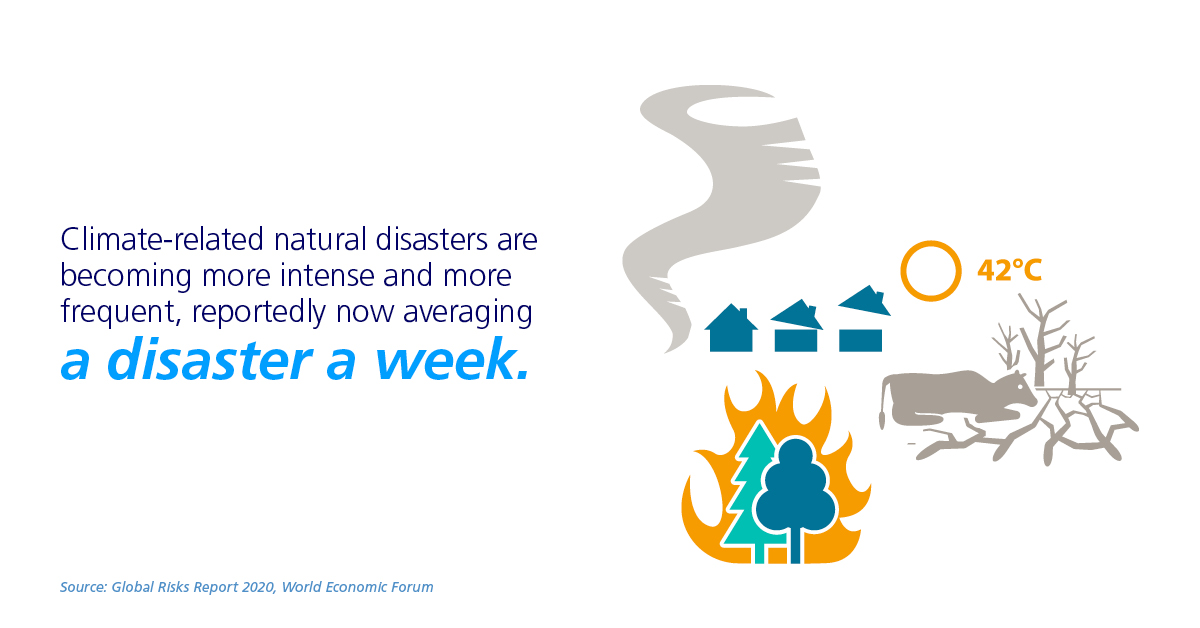 In late 2019, UN Secretary-General António Guterres warned that the “point of no-return” on climate change is “in sight and hurtling toward us”.

Time is fast running out. As the World Economic Forum’s Global Risks Report 2020 puts it, we have “a decade left” to confront catastrophic climate threats, including the less visible but no less significant issue of biodiversity loss.

“Climate change has become a private-public discussion,” says John Scott, Head of Sustainability Risk for Zurich Insurance Group, which acted as a strategic partner in producing the Global Risks Report.

This message is already hitting home across the board. Environmental concerns dominate the top long-term risks identified by stakeholders canvassed for the report. Among younger generations, concern was found to be even greater – they ranked environmental issues as the top risks in both the short and long terms.

These climate and corresponding economic risks threaten a 2008-style systemic collapse, as human-caused carbon dioxide emissions need to fall by 50 per cent by 2030 relative to 2010, and to “net zero” by 2050 to prevent runaway climate change. Put simply, the next decade will shape the climate risk outlook for the rest of the century.

Reaching these targets will require serious economic and societal transitions which depend on technological innovation and commitment from both the public and private sectors.

Yet to date, commitments and preparation for this scale of change have been inadequate. Companies appear ill-equipped. Many do not quantify physical climate risks in their direct operations and supply chains – and those that do are likely to be underestimating them significantly.

They may also struggle to anticipate future shifts in government policy and customer preferences in time to align their strategy. Take the rapid rise in demand for non-plastic packaging for example – a development which took companies, both large and small, by surprise.

The implications of climate risk are almost endless. Another example is the potential for disruption to the mortgage market, particularly in vulnerable regions like Florida where 30-year mortgages could default en masse if homes become uninsurable over time.

Then there is critical biodiversity issue – an increasingly critical concern. Thousands of species are becoming extinct every year as a direct consequence of how we grow food, produce energy, dispose of waste and consume resources.

Sir Robert Watson, Chair of the Intergovernmental Science-Policy Platform on Biodiversity and Ecosystem Services (IPBES), says: “Biodiversity and nature’s contributions to people sound, to many people, academic and far removed from our daily lives. Nothing could be further from the truth – they are the bedrock of our food, clean water and energy.”

Humans rely on biodiversity in fundamental ways, from pollinating crops to curing diseases. Species currently endangered by biodiversity loss include the South American cinchona tree, the source of the malaria drug quinine.

The Global Risks Report takes the Mexican axolotl as a headline example, as this lesser-known amphibious creature has the unique ability to regenerate severed limbs, unlocking instructive medical insights for human medicine in the fields of tissue repair and development as well as cancer treatments.

Biodiversity loss has come to threaten the foundations of our economy: one attempt to put a monetary value on goods and services provided by ecosystems estimates the worth of biodiversity at US$33 trillion per year — close to the GDP of the United States and China combined.

More worrying still is the growing body of evidence that biodiversity loss and the warming planet are mutually, destructively reinforcing – each exacerbating the other. The higher the level of biodiversity in the ecosystem, the more successfully it can adapt to change. For this reason, expert companies such as Zurich view preservation of biodiversity as an important measure to manage climate transition risk.

Nevertheless, transitioning to a low carbon economy, while almost universally acknowledged as the correct course of action, will bring its own risks, especially if shifts occur hastily or without proper safety nets for vulnerable communities. Indigenous peoples comprise less than 5 per cent of the world’s population but protect 80 per cent of its biodiversity.

Alongside the risks, the next decade brings tremendous opportunity. Breakthroughs are happening all the time. Most recently, a start-up announced it had developed a way to harness artificial intelligence and mirrors reflecting the sun to create the extreme heat required for industrial processes.

In most countries, it is now cheaper to install new wind or solar power stations than coal. 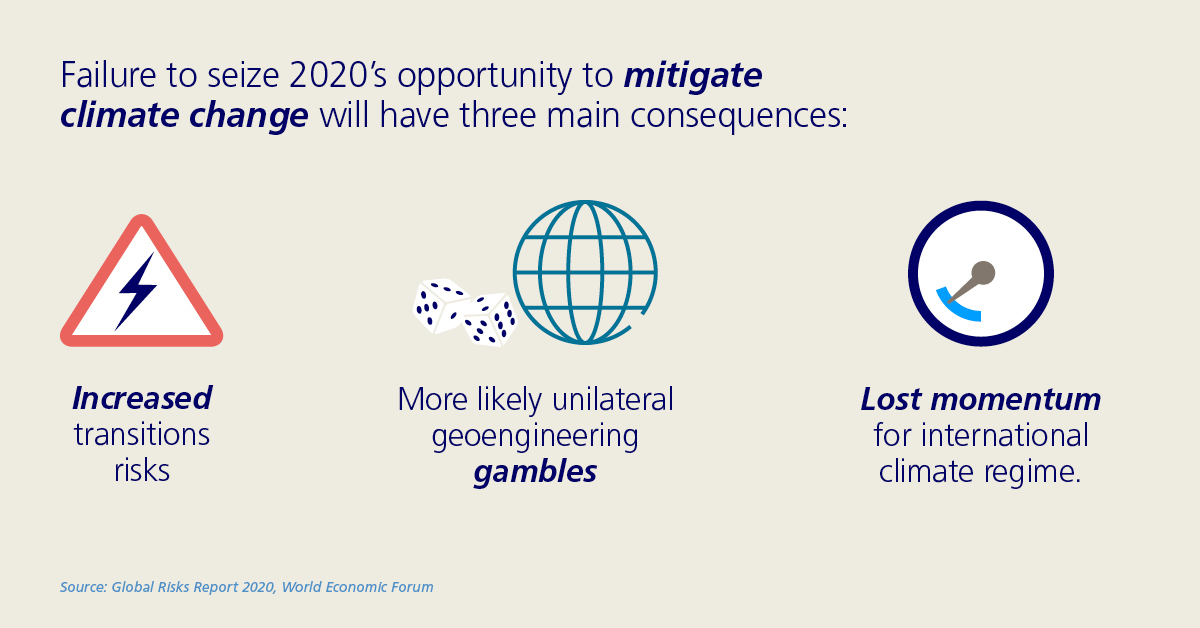 For businesses which think long and hard about their environmental strategy, the rewards are clear. Unilever's Sustainable Living Plan has now been in place for a decade, and in that time the company delivered consistent, industry-outperforming top and bottom-line growth as well as 300 per cent shareholder return.

“The point is you can't be successful in sustainability issues unless you make money,” adds Zurich’s John Scott. “It's not just about the fear of losing business but guiding your company to success in this changing world. And that means figuring out what you've got to do to deliver that change.”

Today, as we stand on the doorstep of a “sixth mass extinction”, concerted action is required not only to reduce emissions, but also to develop credible adaptation strategies, including climate-proofing infrastructure, closing the insurance protection gap and scaling up public and private adaptation finance.

This will require governments and businesses to identify and prioritize risks and develop metrics and strategies to manage them. Businesses can apply Zurich’s Climate Resilience Adaptation Strategy to assess their position and come up with solutions. As part of that, Zurich’s Total Risk Profiling approach can provide them with a comprehensive assessment of hazard level, exposure and controls.