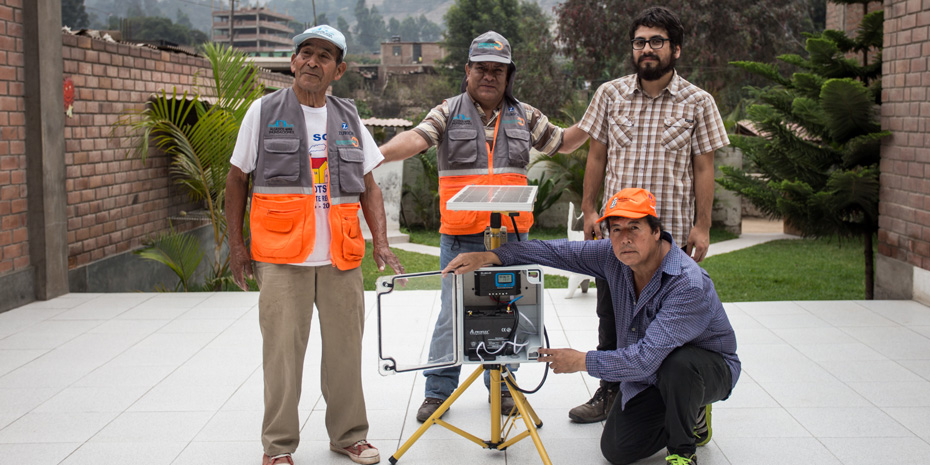 Through cooperation within our flood resilience alliance, Zurich is helping to save lives in Peru. New early warning systems installed with the support of Practical Action, one of our alliance members, help protect communities around Lima from landslides and floods.

The sky is cloudy. It’s mid-afternoon in Chosica. All of a sudden, it starts to rain. Huge drops. It pours only a couple of hours. Within a short time, the streets have been converted into dangerous creeks. These creeks carry not only water, they also carry mud, sand and rocks. People living in this area know the signs, and are scared: landslides* could follow. Chosica is a city in a valley, part of Metropolitan Lima historic center, about 20 kilometers east of Lima. It’s surrounded by hills of loose soil and rocks, with few bushes or trees to serve as barriers – a perfect spot, and, unfortunately, also a perfect setting for landslides.

Reducing flood risk on the outskirts of Lima

One of those familiar with such risks is Nicanor Nuñez. He’s 82 years old, and has been living here since 1951. Now he’s helping to make a difference. On the roof of his three-story house there’s a camera. There’s also equipment that is part of the area’s early warning system that Practical Action installed here in late 2016. It monitors the river Rímac, taking photos every two to five minutes. The photos are sent to the local government’s data monitoring center through an open website. There 5 electronic sensors (cameras and saturation sensors) covering 4 communities in the Lima area where Practical Action and Zurich work.

The equipment on Nicanor’s house does more than take photos. It also help monitoring river levels, and measure soil saturation. All this can help add precious minutes in the event of a landslide or a flood. And it allows the Municipality to get real-time knowledge of hazards (floods and landslides), thanks to images and soil saturation graphs, who in turn mobilize resources for immediate response and communicate the alert to community leaders like Nicanor Nuñez via text message. The leaders then alert their neighbors. All of this can happen within minutes. Even evacuation, which can start within seven minutes along evacuation routes.

In 2017, landslides and resulting flooding in Chosica were actually worse than in other years, according to Miluska Ordoñez. Thanks to the early warning systems, Chosica’s residents were better prepared and were able to take steps to reduce the risks or get out in time. Following the alert, sandbags piled up on the roadsides underscore the community is taking seriously

In addition to the early warning systems, drainage systems have also been installed or improved over the past months. Culverts help to drain the water into the river, preventing houses from being flooded by it. Simple but effective and very important measures that have prevented some zones to be flooded, says Miguel Aréstequi from Practical Action.

Rain forecasts have to be analysed on a local level, explains Miguel Aréstequi. “Rain alone doesn’t mean a landslide.” Ideally, every ravine, where landslides pose a threat should be monitored separately.

Nicanor Dueñas is proud to be working with Practical Action to make a difference. “Practical Action arrived here two years ago,” he says. Since then many things have changed: “They gave us guidance on how to react if a disaster occurs, and on how to prepare ourselves for a landslide or flooding.” Because of the early warning system on the rooftop of his house, the important job of warning his neighbors falls to him. He’s a leader in the fight against a potentially devastating enemy, and is proud of it.

1.  Risk knowledge (through camera and sensors)
2.  Risk monitoring and Alert (through the Municipality)
3.  Communication and diffusion (Municipality and community leaders)
4.  Response (communities)