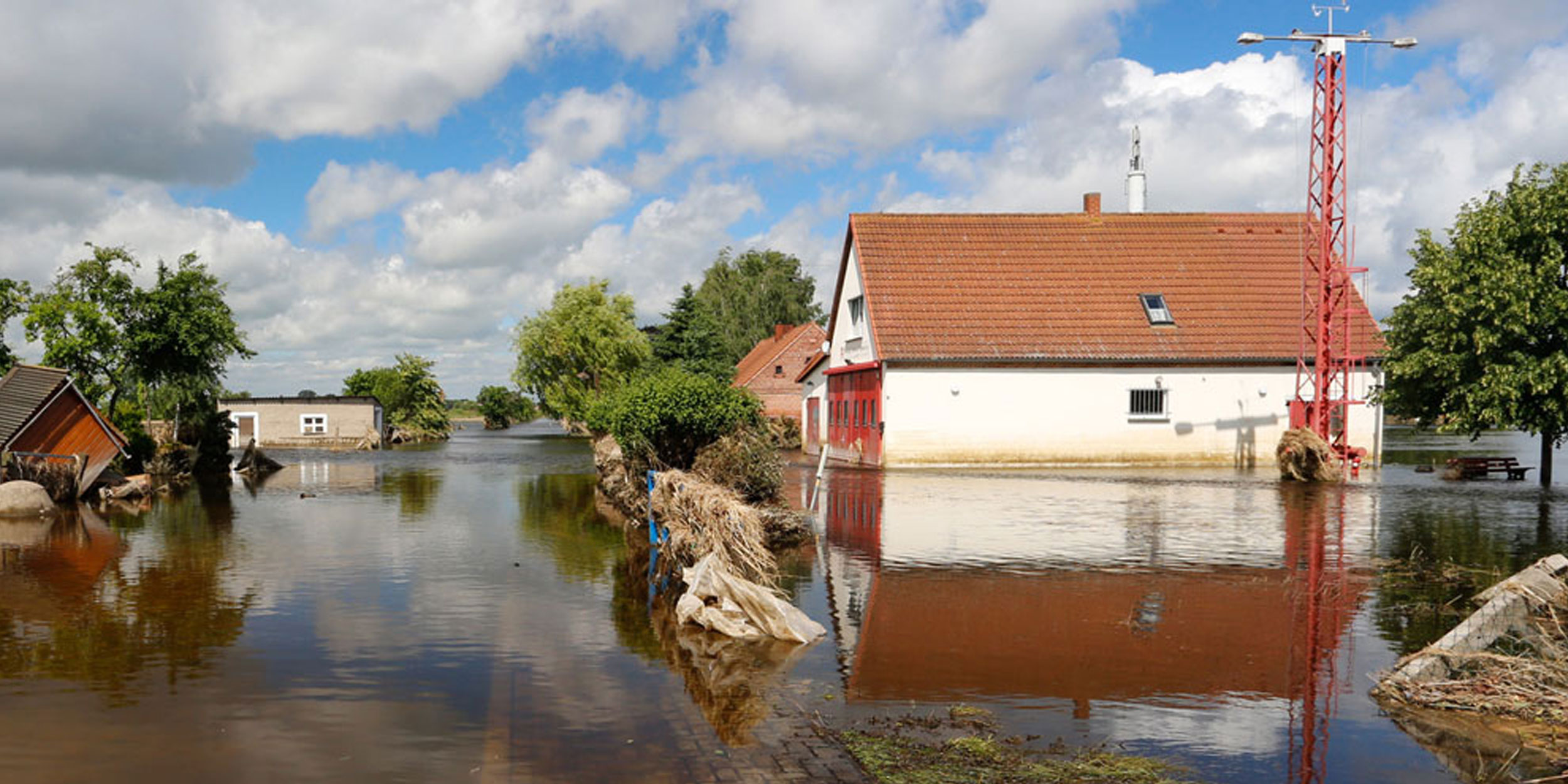 As every flood event is different and brings new challenges, each one also provides an opportunity to learn. It should be standard procedure that in-depth, ‘forensic’ analysis is undertaken after large flood events. The insights then need to be shared and exchanged widely. This paper is intended as a contribution toward this approach.

This report looks in detail at the major floods in 2013 and 2002, particularly in Germany and to some extent Austria and Switzerland, and the impact they had on communities. It looks at what was learned. It draws conclusions and provides insights into what has changed since the 2002 flood, and where changes are still needed.

Much of the information presented here was gathered during on-site visits by Zurich’s flood specialists. They visited some of the places worst-affected by the floods and spoke to local experts, water authorities and customers. They also met people in communities who experienced the floods first-hand and had to deal with the aftermath: cleaning up and getting their lives back to normal. In some cases, this process is still continuing.

Section 1 describes the weather patterns, including heavy rain in May 2013, that set the stage for severe floods that inundated wide areas of Germany, Austria and the Czech Republic in June of that year, killing 25 people and forcing thousands to evacuate. Along hundreds of kilometers of rivers, flood stages were the highest ever recorded. Estimates of the total combined economic losses caused by these floods run from EUR 11.9 billion (USD 16.5 billion) to EUR 16 billion (USD 22 billion). Insured losses were calculated at between EUR 2.4 billion (USD 3.3 billion) and EUR 3.8 billion (USD 5.3 billion). For Germany alone, economic losses were reported to be EUR 10 billion and insured losses EUR 2.4 billion.

One of the places our experts visited was the city of Passau in Bavaria, which was hard-hit by the 2013 floods. Located where three rivers meet, it is no stranger to floods. Its vulnerability highlights the need for serious study of the risks and factors that can mitigate, or exacerbate these events.

While the 2013 flood caused significant losses, things could have been worse. The floods of 2013 (like the floods of 2002) mainly affected the Danube and Elbe watersheds. While there was some flooding along the Rhine, it was relatively minor. An event that could simultaneously affect all three of Germany’s major watersheds has not happened in recent memory. But that does not rule out such an event in future. It is also important to note that the 2013 floods could have caused more widespread loss, which emergency intervention prevented. Luck will not always be on the side of those dealing with floods. Near-miss events also underscore the need for contingency planning to defend key infrastructure and institutions that serve as lifelines.

Until 2002, many people in central Europe were unaware that flooding was possible on such a large scale. Section 2 compares the 2013 and 2002 floods, drawing on insights from our field research. We highlight the similarities and the differences between the floods of 2002 and 2013, starting with the meteorological situation at the outset, then showing the flood stages measured at the main three watersheds and ending with a series of purpose-built maps that identify the areas most affected by the two flood events and the locations where levees failed. This section also provides information on the economic and insured losses of the two events and how they were affected by protection measures that were put in place since 2002.

Section 3 looks at which flood protection measures worked well and which did not. In the German state of Bavaria, where measures to increase flood protection included increasing the height of a dam and risk reduction measures along the Isar river, Munich and Landshut avoided serious flood damage. Park-like areas created to give the Isar more space, reducing its destructive force, can be used for leisure when no floods threaten. Such success stories show that flood protection can even enhance people’s quality of life. Another way to effectively mitigate flood risk is to create ‘polders,’ areas set aside to retain water during floods. The decision to use such areas depends very much on the will of communities. Polders were shown to work in the German state of Brandenburg. Especially ‘controlled polders,’ areas that are flooded precisely when they can best curb the flood crest, have proved their worth.

Investing in flood resilience, provided it is done constructively, also offers advantages. Even though flood levels in Salzburg, Austria in 2013 surpassed the levels of 2002, investments – including in mobile flood barriers – paid off and reduced damages and losses.

To address flood risk, more needs to be done. This includes more thorough risk assessments. Improved forecasting tools are needed at times when minutes count in making key decisions that could affect thousands of people. Meteorological forecast models today may not give sufficient advance warning. Measurement stations, too, need to provide more, and better data. Uncertainties related to the so-called ‘rating curve’ – the curve showing the relationship between water discharge and the flood stage at river gauges – should also be addressed.

We should re-examine how we think about flood protection. Levees offer a critical line of defense against floods. But they also bring with them new problems, including a false sense of security for those living behind them. The fact that levees can fail with devastating consequences was made clear in the town of Fischbeck, Germany, where a levee breach in 2013 led to a risky manoeuvre to sink three barges in order to plug the gap, a desperate measure of last resort. We can learn from other countries how they deal with flood risk and what technologies they use to solve a particular problem, for example, levee failures.

Political support and the participation of communities is needed to initiate and continue to implement useful and lasting change, including better information and improved education. Some of the possible measures seem quite straightforward. Individuals living in flood hazard zones, for example, need to understand the importance of complying with regulations requiring heating oil tanks to be protected, avoiding contamination that could lead to a home becoming a total write-off after a flood. This type of awareness or willingness to act is frequently missing. To raise awareness among policymakers and individuals, better access is needed to maps showing flood hazards, and the maps themselves should be improved and standardised.

Encouraging pro-active risk reduction can be achieved through incentives that reward a sounder approach in rebuilding, or possibly in extreme cases, relocating. Average losses for households affected by flooding in Germany are in the range of EUR 50,000. For large-scale protection projects benefiting towns and communities, on average, the benefit derived relative to the cost can be expressed by a ratio of at least four-to-one, or even much higher.

Not just individuals but also countries need to consider their approaches to flood risk. This includes more centralized decision-making. A national authority can help to accelerate the process of finding agreements acceptable to all regions, parties, and interest groups involved, especially to resolve difficulties associated with relocation, compensating people who provide flood retention space, and addressing other problems. It is also critical to understand how connected risks are, and how stress in one part of the system can have a knock-on effect.

‘After a flood’ is really just ‘before the next flood.’ Section 4 offers recommendations that provide a general guideline for those facing flood risk. It includes measures that could be applied elsewhere, depending on the individual situation. At the same time, it is important to note that flood hazards and flood risk management are very situation and location-specific. The best approach is to build outside of flood hazard zones. If this is not possible, then natural retention offers advantages over artificial measures (for example, levees or mobile protection). Beyond this, reducing vulnerability, and stringent planning to deal with emergencies is necessary. Once a flood has occurred, reviewing what worked and what did not work, and finding ways to make improvements, is key. In all cases, communities and individuals need to be given a say not only when a project is underway, but also in the early planning phase.

The paper draws on these findings to provide recommendations that would be useful for communities not only in Germany, but worldwide, to help mitigate the risks and losses caused by floods. There is every likelihood that floods might be bigger and more catastrophic in future. The climate is changing, while asset density in flood-prone areas increases. It is clear that significant changes must be made to address the risks of the next major flood. Section 5 looks at a future flood event, the hypothetical ‘Flood of 2023,’ and makes clear that we need to think the unthinkable. The floods of 2002 and 2013, though devastating, could be overshadowed by the next major flood. Beyond changing the mindset that ‘a flood of the century happens only once every 100 years’ (which is clearly not the case), action is needed now to address the risks and look to the future.