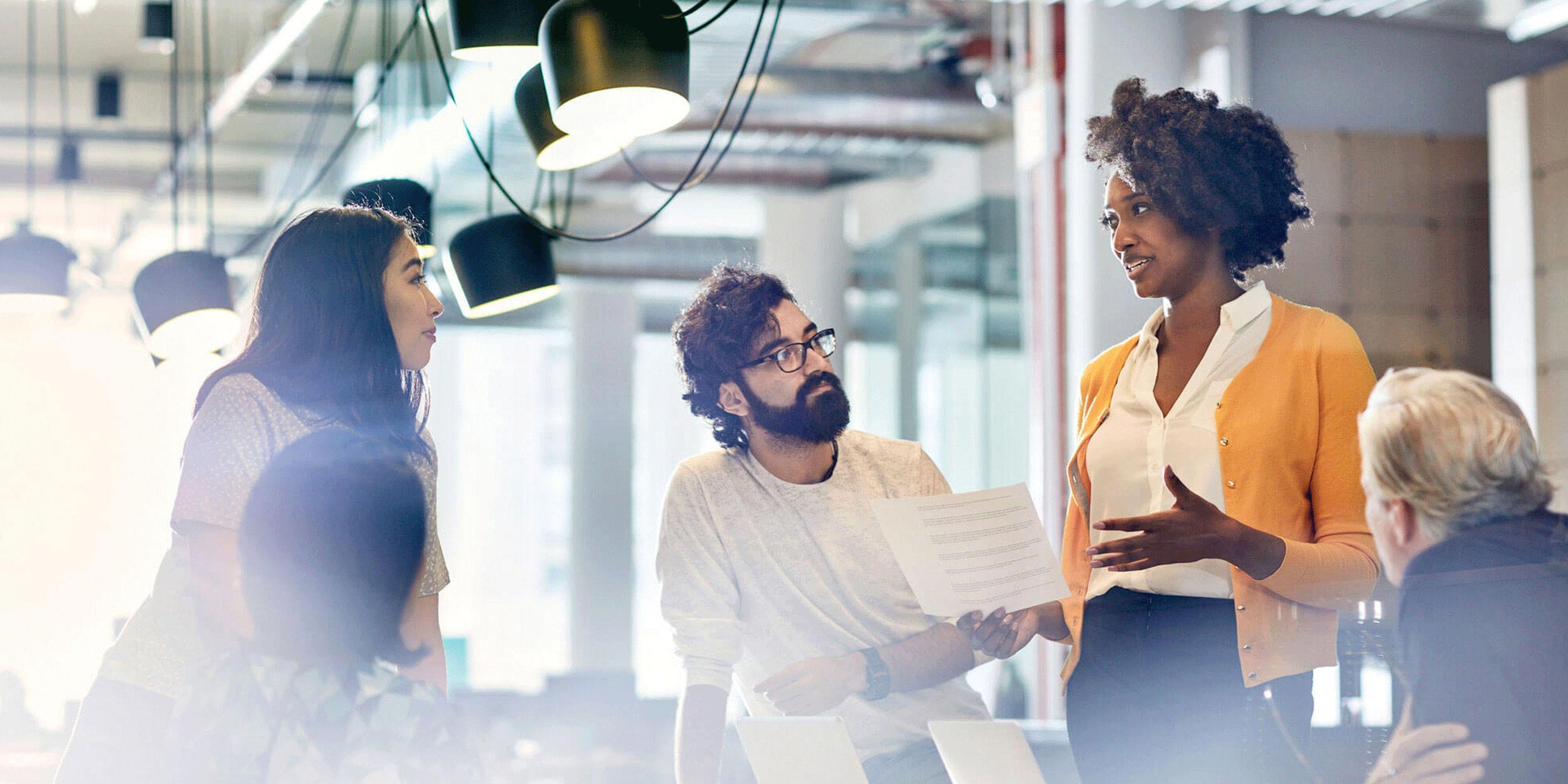 The next generation of business leaders and officials needs to discover a new way of approaching globalization that recognizes the insecurity many people experience and resulting trade tensions and polarized societies.

What Globalization 4.0 promises in rewards, it demands in reforms.

The next generation of globalization will be about, leveraging technologies such as AI, robotics and the Internet of Things to reshape not just economies, but entire societies—from employment and health to transportation and production. Globalization 4.0 is change on a scale previously unseen, and experts say it demands not just new policies and standards to earn the trust of a wary public, but new frameworks for international cooperation to fully harvest its bounty of opportunities.

New approaches to globalization must respond to the insecurity that many people are experiencing. That means combining innovative approaches to complex international issues—technology, climate change, trade, taxation, migration—with renewed attention to national concerns, such as social protections and education.

Rebuilding the architecture of our national and international political and economic systems will be the defining task for the next generation of leaders, according to Zurich Insurance Group. Progress requires two things: aligning on substantive priorities for action, and then sustaining coordination and collaboration. The example of climate change shows that, even when the first is possible, the second can be challenging.

Prioritizing long-term objectives is challenging in a political landscape increasingly ruled by short-term agendas, from isolationism in the United States to Brexit in the United Kingdom, to the gilets jaunes protests in France. This focus on litigating past failures threatens the collaboration necessary to meet the challenges of Globalization 4.0, according to the Global Risks Report 2019, which warns that the world may be “sleepwalking into crisis.”

“The energy now being expended on consolidating or recovering national control risks is weakening collective responses to emerging global challenges,” says the report, published by the World Economic Forum. “We are drifting deeper into global problems from which we will struggle to extricate ourselves.”

There has to be a drive to showcase the growing of the economic pie rather than of the winner-take-all, beggar-thy-neighbor attitudes.

Populism is trumping preparedness in many countries, raising concerns over potential trade disputes and social unrest. The Global Risks Perception Survey found that 91 percent of respondents are worried about “economic confrontations between major powers,” while 88 percent fear “erosion of multilateral trading rules and agreements.” Those jitters are unlikely to be calmed by widespread nationalist sentiments now trending.

“It seems there is no political opposition that can tap into the grievances and insecurities of the electorate while presenting facts and constructive policy initiatives to act as an alternative to the populist rhetoric and direction,” says Guy Miller, Chief Market Strategist and Head of Macroeconomics at Zurich Insurance Group. “For democracies to function and societies to prosper, opposition parties need to be strong and offer credible, appealing alternatives that can work across party lines. Currently, this is not happening.”

Among the G20 major economies, just 32 percent of GDP is under the control of mainstream democratic parties, down from 83 percent in 2007. In this same period, the share of GDP controlled by populist parties has grown from 4 percent to 41 percent, with authoritarian governments also commanding a greater stake. This dramatic shift illustrates the difficulty in moving beyond the backlash to shape a positive trajectory for an innovation-driven global economy. 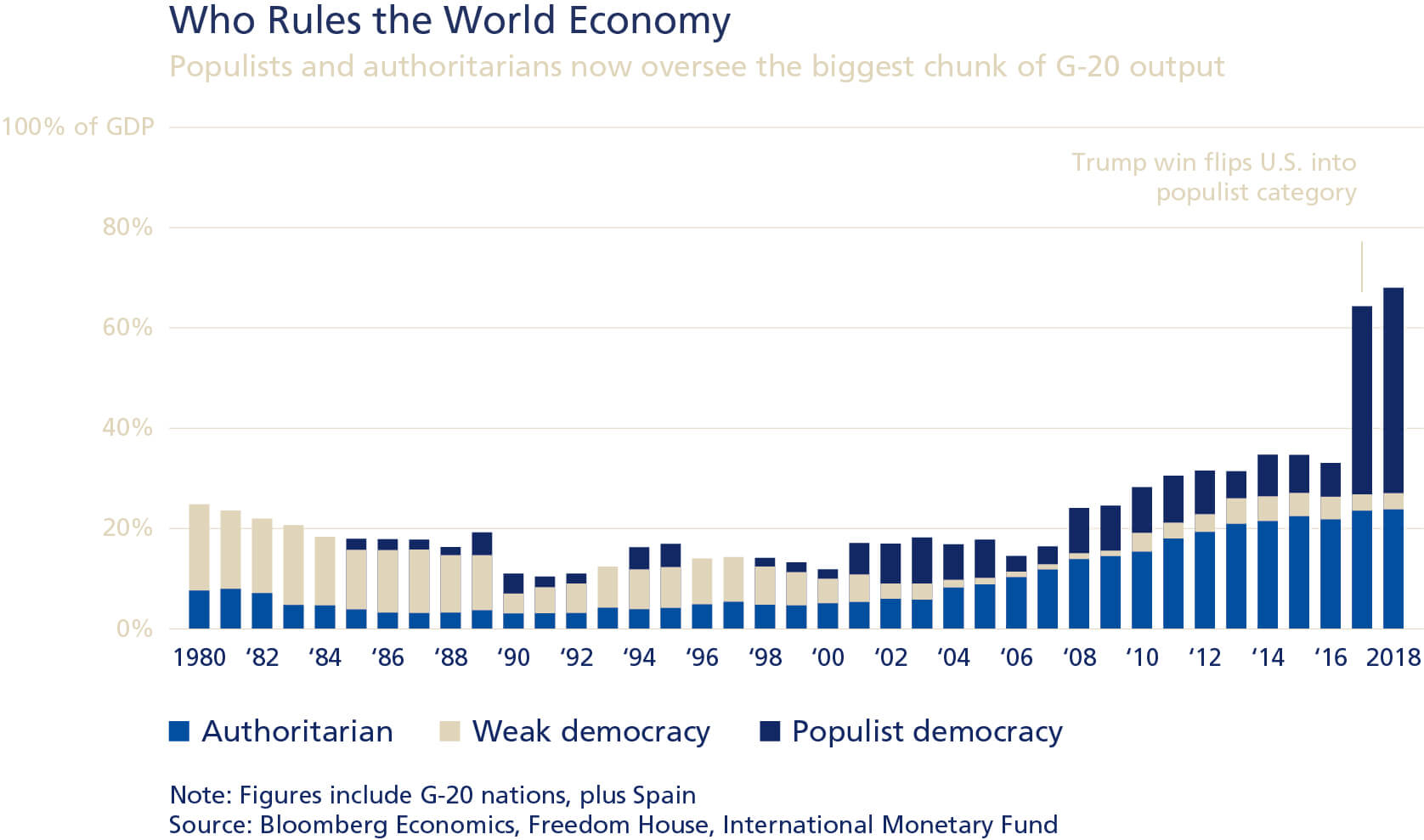 Globalization has always been part evolution, part revolution. Its first wave, more than a century ago, reinvented trade with the dawn of mechanical power. The next evolution followed World War II and spread its benefits to the masses while creating international governance with institutions like the United Nations, IMF and World Bank. Globalization’s most recent iteration witnessed the moving of production across borders to take advantage of the high-tech/low-wages dynamic in developing economies.

Globalization 4.0 goes beyond the movement of goods, factories and know-how, allowing industries to arbitrage international wage differences. Advances in AI and robotics permit the relocation of tasks without the physical movement of workers, while digital technology makes it easy for a worker to perform labor for an enterprise located in another country. Globalization 4.0 will radically reshape many service-industry sectors that were relatively untouched by previous waves. And that has major implications for employment and education systems around the world. Even as some sectors will see shrinking employment, experts estimate that half of the jobs needed in the next 25-50 years don’t exist today.
Meeting these needs requires upskilling of labor force—along with strengthening social safety nets for those left behind.

“The focus should be on investing for the future rather than on safety nets. There has to be a drive to showcase the growing of the economic pie rather than of the winner-take-all, beggar-thy-neighbor attitudes that appear part of the latest economic cycle,” Miller says. “Governments and businesses need to invest to keep their economies at the forefront of technological change and innovation.”

Of course, the challenges posed by Globalization 4.0 aren’t limited to government. Nor are the solutions. Public-private partnerships with an eye on sustainability and social inclusiveness can drive growth for the public good, suggests Angel Serna, Zurich Insurance Group’s Head of International and Swiss Public Affairs. “Neither the public nor private sectors can solve the societal challenges we face alone. We need to increase momentum on working together and resist silo thinking,” Serna says. “As experts on risk management and risk transfer, insurance is well placed to take a prominent role in this new architecture.”

“First, place sustainability at the heart of the organization. We must do business in a way that safeguards the future of the organization and society,” he says. “Second, act as a trusted local player. The current geopolitical climate and protectionist sentiment renders a one-size-fits-all approach ineffective. Businesses can be global in nature but must demonstrate local understanding, sensitivity and value.”

The populist backlash against globalism has exposed bureaucratic failings in many institutions, from the IMF to the Eurozone, making them easy targets for the discontented. It is also drowning out advocates for progressive reform of those systems, much less those arguing in favor of the wholesale reinvention that Globalization 4.0 demands.

“A radical rethink is unlikely in the near term. An evolutionary process will be required that allows existing institutions and processes to become more relevant,” Miller says. “Perhaps it takes greater pain, unrest and time for a new political balance to emerge, a new generation to pick up the baton and push initiatives that resonate with the younger electorate.”

It’s a paradox that the world, more interconnected than ever, has such urgent need of a new apparatus for political and economic cooperation.